After four overnight stays in the marvellous county of Donegal, we headed off to the almost middle part of Ireland, Kilbeggan. There were no in-between stops this time, just a long, almost four hour drive spent mostly on the national highway. This journey was also a very pleasant experience, as the national roads in Ireland cut through very scenic and impressive areas. Added to this, there were no traffic jams, big puffing lorries, or irate motorists. Bliss! We reached the Kilbeggan Distillery in pouring rain. Our pre-booking was postponed to an hour later, which was okay, because by now we were quite cold and hungry for something warmer than biscuits. The distillery has a very good little restaurant on its premises, and we were lucky that a big group of tourists were on their way out, or else there would have been no place to sit. The restaurant is called the Pantry… enough said, wink-wink. The ambience was great, and the food divine and oh so yummy! Oh, and it’s a good idea to eat before doing all that whisky sampling   🙂

Our personal French tour guide, who spoke perfect English, collected us from the Pantry to start our tour. The first impressive thing you see is this English (the flag on the badge was a dead giveaway) vintage car from the 1930’s called a Standard Ten. It is still in great working condition!

The drive shaft (left) turned all the machinery in the distillery. One end is connected to a 19th century water wheel (still in a good working condition) and the other end is connected to a steam engine (right), which was rarely used. The steam engine was only installed so that it could operate when the water level of the river was low, or if the water wheel needed repairing. 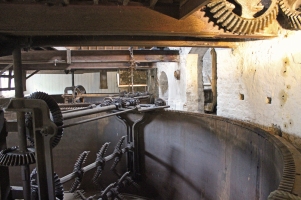 The Brosna or Brusna River, popular for fly fishing, flows through the distillery, where the water was used to fill these large brewing vats (left). The steamed heated water was then let into these iron mash tuns (right) through a perforated false floor, together with a grain mix from a chute overhead, then slowly heated for about four hours. The starches in the grain then changed into sugar, was absorbed by the water, and eventually drained out. This sugary liquid was called Wort. The leftover grains in the mash tuns were sold to the farmers and used for animal feed.

The worts were drained into the container on the right (brew-language: underback) flowing into copper pipes which were set in the bed of the river to cool the sugary liquid. The cooled liquid was then collected in a lower underback and pumped up to the fermentation vats.

Yeast was added to the wort once it reached the fermentation vats (mothballed fermentation vat above – current one below) and after about four days, the sugars changed to alcohol. This frothy liquid with about a 7-8% alcohol content was called wash, or “pig-ale” as the workers called it as it was quite difficult to swallow.

The stills were first filled with wash and fires were lit underneath. In the early years the stills were heated by locally produced turf, later, imported coal was used. With steady heat supply the alcohol evaporated. Then it was condensed by passing it through copper pipes in cold water tanks. This condensed liquid collected in the canpit room. When enough had collected the liquid passed out to the stills to be distilled again. After distilling, a clear strong alcohol called First Shot was produced. It was similar to good poitín (illegal Irish whiskey) 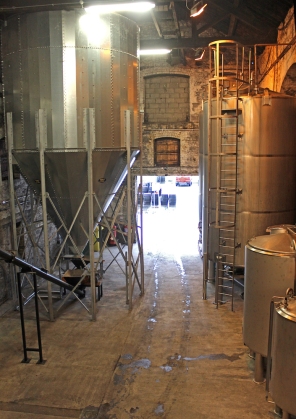 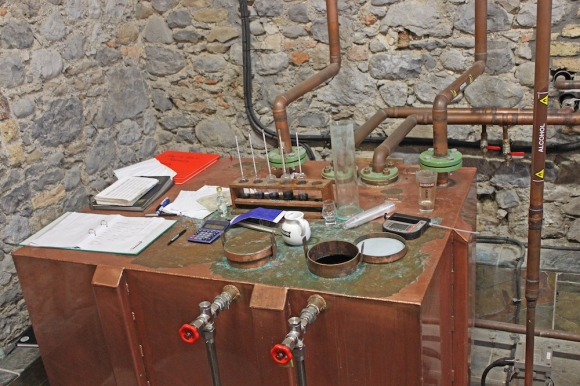 The spirit store consists of the Blue Vat and the filling and weighing apparatus. The Blue Vat was filled with the freshly distilled whiskey, and to bring it to the correct strength, distilled water was added. Then they filled casks and brought them to be stored in the warehouses to mature. 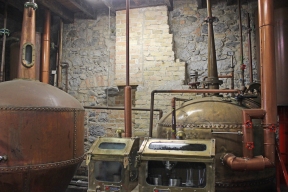 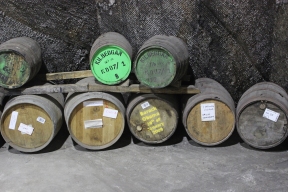 The Copper Pot Still of the new distillery (left) was made in the early 1800’s and is the oldest whiskey producing pot still in the world today.It was once used in the distillery in Tullamore and was installed by Cooley Distillery, and run in 2007 to mark the 250th Anniversary of the Old Kilbeggan Distillery. This freshly made Pot Still Whiskey is then filled into small oak casks and matures in the warehouse. Below is a picture of the Cask Filling Station in the warehouse. 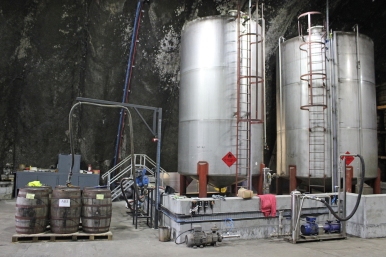 In the maturation warehouse there is still a lot of open space but it was good to see how many freshly filled barrels have gathered since 2007. 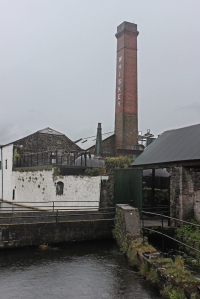 The outside of the distillery, showing the river that runs through it… 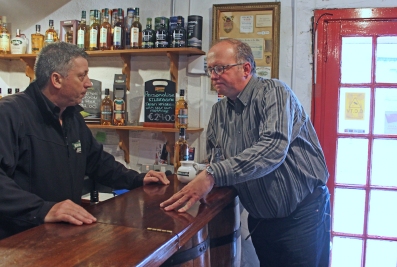 After the tour you can relax in the bar, buy something, sample a dram or two, or have serious whisky discussions with the distiller.   😜 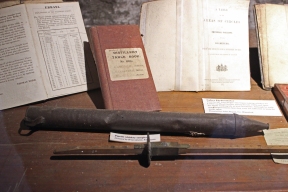 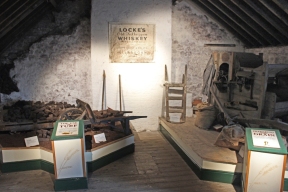 These items can be found in their very interesting “museum”.

These are the impressive Pot Stills of the Tullamore Distillery. Around the end of the 1990’s, they were saved from being turned into a molten mass by John Teeling. 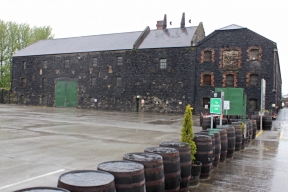 The warehouse to the left was built in the 1930’s and is jokingly called the jelly-mould. The photo on the right is a 200-year old granite warehouse.