After all the whisky fumes from Kilbeggan, we headed south towards our next stayover, Kildare. After checking into our cozy (okay, small) little B & B, we met our local friends for supper in the centre of town. Food was great, atmosphere fantastic and the banoffee served for dessert was the best ever!!! Yum-yum! We did not stay out too long though, as some-one, the same some-one who had been nipping “spirits” a few hours before, was quite tired (or was it the other thing, hic-wink-wink-hic)  😲

It was a short and bed-small-hard night, but after a typical fry-up breakfast made by a charming host, and bellies swelling with beans, we were ready and waiting to start our new sight-seeing adventure. This time it was more wonderful because we could leave our car squatting on the gravel, as we did not need to drive anywhere ourselves. Instead we were “chauffeured” by our very patient and informative friends. The road between Kildare and the city of Waterford,  our surprise trip for the day, is not too long, about 90 minutes, takes you through the amazing Irish countryside, and depending on the route, also through three counties.

When you arrive in Waterford, the first thing you notice when crossing the bridge is a huge river (the Suir) which automatically tickles your “close-to-bursting” bladder. Pinching all muscular exits into a coma, you also notice the many little and big boats, one cruise ship (the MS Hamburg) and a cool parking lot which runs along the river on the one side. Most cities would ban all cars from being anywhere near a pier, marina or quay, for the sake of the tourists or hand-holding lovers 😙  The Waterford Marina also has a very busy dual road, called the Merchants Quay, yet there still was enough parking spaces available, and a public toilet. Phew! Too much delicious Irish tea for breakfast… 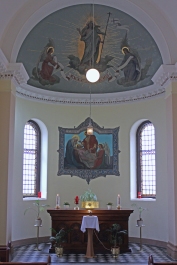 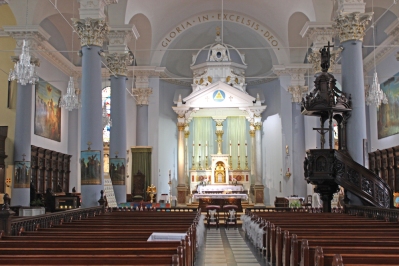 After a bit of retail therapy, a creamy hot chocolate and a creamier slice of cake, we stepped into this lovely church called the Cathedral of the Most Holy Trinity, which is situated right opposite the coffee shop. As you can see in the second photo, the pews and altar were decorated with white lacy material because a wedding was about to take place. What you do not see (or hear) are the musicians. A harpist, a violinist, and a soprano giving you goose-bumps, that’s how nice she sang. We also met the delightful Father Paul, who gave us a short lesson on the history of the cathedral. This photo also shows some glittering crystal chandeliers. Waterford is the home of the famous Waterford Crystal, who gifted a total of ten chandeliers to the Cathedral. The Altar is also quite new, built only in 1977 when the Cathedral was refurbished. We had to leave before seeing everything, as the wedding party had all started to arrive, and we definitely did not look posh enough in our blue jeans 😉

Waterford is the oldest city in Ireland, established by the Vikings way back in the eight hundred and something years. These silly tongue pointing people could not resist the opportunity to go back in time just to get a bit of the Viking feel. There are many others also waiting to do the same. There is only one statue, and be prepared to contort your body or else you won’t fit properly behind it. One of us had a bum-peeping-out problem… 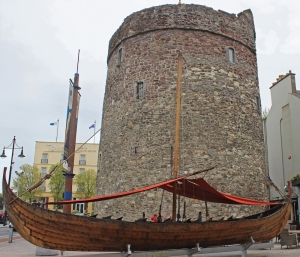 This circular defence tower from the 13th century, the Reginald’s Tower, can be found in the city’s historic Viking Triangle. It is named after an Irish-Viking called Regnall (Reginald). It is the oldest civic building in Ireland, and has had many uses over the years (prison, storehouse, mint, royal castle, to name but a few). It was also the venue for a famous marriage ceremony in 1170 between the leader of the Anglo-Norman invasion force, Strongbow, and the daughter of Diarmaid, the King of Leinster. The Christ Church Cathedral disputes this though, as they claim that the wedding took place in their Cathedral, as written on their own website. Both historical versions agree on one thing, and that is that this marriage changed the course of Irish history forever. The tower is now a museum. The Viking Longboat in front of the tower is not a war boat, nor is it an original, but rather an exact replica of one found at the Viking Museum in Roskilde, Denmark. This type of boat was used for trading purposes.

A few hours later we motored southwards towards the coastal town of Dungarvan situated on the mouth of the Colligan River, which actually divides it into two. Irelands only stash of mammoth elephant bones, dating back forty thousand years or so, were dug up here. The town was later also well known for its hake fishing industry. As can be seen on the left photo, taken from Davitt’s Quay, the sun was out and the tide was low when we arrived. Dungarvan is beautiful, with the Comeragh Mountains nearby (good for hiking) and the Irish Sea on its doorstep. It was also nice to have such a good view (and an even better camera) of a Grey Heron landing on the water. No, we did not see it catch any fish. Must’ve had lunch already 😋 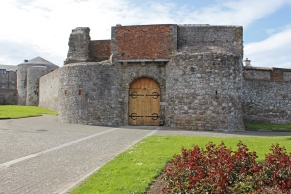 The striking turreted Dungarvan Castle (above), built at the mouth of the Colligan River, is an Anglo-Norman fortress built in the 1180’s. Over the years it has been upgraded to accommodate cannons, was captured and blown up, set on fire, restored, used as a Garda station, and now is the exhibition centre for the history of the castle. We did not have time to see the inside, but we’re told it is worth a visit. Oh, and here’s a gory little tit-bit: there were heads propped on poles and publically displayed on one of the castle towers. Yes, dead and cut off rebel heads…eeewwww! Here’s another absurd bit of information: Oliver Cromwell, the one that failed to take Waterford, managed to capture Dungarvan, but as he was marching into town, a local woman gave him some wine. He then decided to spare the town from destruction? Hmm, so the wine was good then? 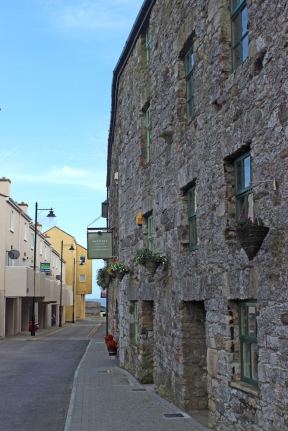 This lovely stone building to the left is a restaurant, cooking school and guesthouse. A few steps down the road and you’re at the mouth of the river. The Old Market House (right), which is around the corner from the restaurant, could have been a courthouse in 1641. It was the centre of the town back then, later used as a butter market (markets were held here too), then a library and museum, and now houses an Arts Centre. It was also the place where all public executions took place, probably only when it was a courthouse. Certainly hope so, because it is difficult to imagine blood in the midst of all those vegetables!! Creepy! One prominent Irish patriot was hanged from one of the windows on top. Shiver! Yes, art is definitely better!

…and he’s been regretting it ever since 😂  What?? He’s the one who pointed it out to me! Scout’s Honour*hiding hands*. I did not see it first, nor did I strategically position myself next to it. Oh, and it wasn’t me who wanted a photo as proof 😇  *uncrossing fingers*  👀 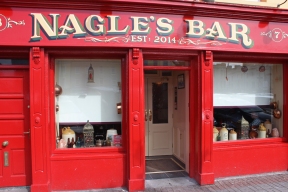 The red Nagle’s Bar and the green Paddy Foley’s Bar are both traditional Irish pubs, one much older than the other, and can be found on Grattan Square, a historical and busy little area in the heart of the town. 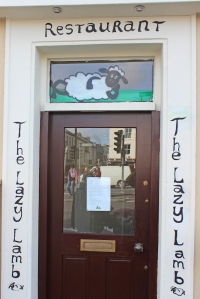 After exploring and breathing in all that sea/river air, our stomachs were starting to make strange rumbling noises. So there we were, walking up and down the square trying to find somewhere decent to eat. Imagine our excitement when we spotted the lamb here, mouths already watering in anticipation! Hrmph! It was closed! We were unfortunately an hour or two too late, as most eateries had already closed for lunch. We finally managed to find a small restaurant around the corner that served delicious food, an array of heaps-on-hips desserts, and the typical friendly Irish atmosphere thrown in for free… 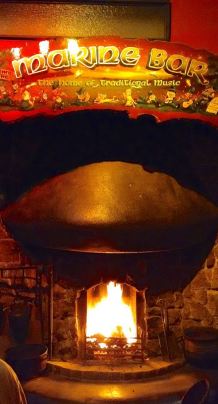 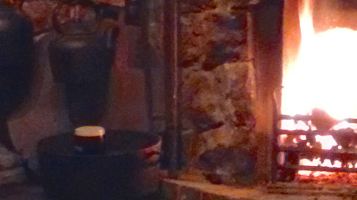 Sated and happy, we heaved ourselves out of our chairs and made our way to enjoy an evening of live traditional Irish music. Our friends suggested the Marine Bar, that’s not even ten minutes drive from the town centre, and conveniently on the fringe of the N25 highway. Do not be put off by this though, as it’s in a very rural location and you cannot get lost either. Oh. What. A. Night! It was still a bit empty when we got there, but just a few minutes later it started to buzz! The music was absolutely fantastic, especially the accordion player!! Never ever have I seen someone play this instrument with such passion and nimble fingers, not even in oompah-oompah land. There were many who took to the “stage” and sang. Young, old, in-between. The Irish really have amazing voices! As the night went on, the noise levels got higher, but mostly from all the sing-alongers, like us. We felt at home, enjoyed all the hugging, dancing and shouting-in-my-ear talks. It was a very special night that we will always remember! One very, very special and delightful person, Tom, was there with his family and friends to celebrate his 82nd birthday. He kindly invited all of us, yes everyone who happened to be there, to celebrate it with him, feeding all of us with delicious sandwiches. He also stood up and sang. Sadly Tom has since passed on 😢 We would like to take this opportunity to express our heartfelt condolences to all those who knew him, especially to his family. R.I.P. Tom and thanks for an enjoyable evening and the lovely chat. We look at the video of you singing and cannot help but smile.