Day Three. Oh. What. A. Night! Oh. No. Is. It. Morning. Already?! Yep, we were on our way again, this time to the beautiful city of Cape Town…So with a slight “babalas” (South African speak for: what the hell was in those cocktails) and lots of excitement we took the train to the airport. The Gautrain rapid rail system was built for the 2010 World Cup and is still in use today. It is also reliable. From the station two blocks from where the family stays to the airport is only fifteen minutes. It does not get better than that! The O. R. Tambo or Johannesburg airport was also extended and renovated at the same time, so hosting the World Cup was a great benefit for the region. The other “new” and seemingly helpful benefits which we encountered at the airport left a slightly unpleasant taste in my mouth. As soon as we entered the terminal, a man came towards us offering to help carry our bags and promising a speedy check-in. We thought this was a nice service and I even went as far as praising the airport administration for even thinking about such a service for their  travellers. Hrmph! The check-in was speedy alright, but only because there was no-one else ahead of us. He walked with us right up to the security entrance, all the way asking for money. We gave him a brown note. He refused and insisted that he wanted HIS money. What money, we asked. Well, he said, we “hired” him to carry our bags, so we must pay for this service. What?? He even took out note and said: “You see this, this is a blue Mandela. This is what I must now get from you”. He was whispering, which was odd, and on closer inspection, the wooden “name plate” in his hand was a big worn out toblerone chocolate box! We refused to give him anything. He tried to threaten, but we just walked into the security area. It turned out that this man was part of a scam trying to get money out of unsuspecting tourists. What was funny is that another person tried to polish our shoes while we were “discussing”…Eish! A lesson learned, but this did not spoil our mood. You see, we’ve travelled many places near and far, and believe us when we say that this nonsense can happen anywhere in the world, and in places that no-one would suspect is even possible…It’s not just an African thing…so there! 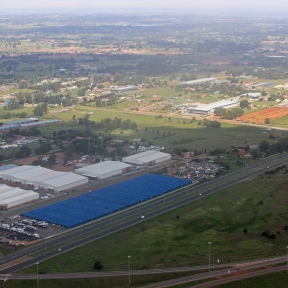 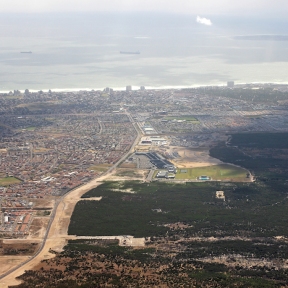 Here are some aerial photos taken from the plane. The very first one is just outside of Johannesburg. The next two are en-route and the last three are during the descent towards Cape Town International Airport.

Hello dear family and thank you for having us. We were welcomed with open arms and spoilt with this lovely dinner spread. My family know how to cook! Eat and be merry 🍴Babalas totally forgotten hee-hee…Oh, and the photo below is me the night before sipping and enjoying a wonderful creamy dreamy local cocktail called Dom Pedro. That little glass, or two, or five, is what caused the babalas…YOLO…enough said. And guess what! The German is now an expert at mixing a Dom…did I say YAY, or was that YOLO? 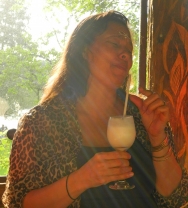