Day six: Thick and heavy clouds everywhere, and the possibility of it raining for the first time since we’ve landed in the country is very high. It’s one of those days that all you want to do…is wine. Where better to do this than in the attractive Cape Winelands. Some of the best wines in the world come from this region (heard it through the grapevine…yakkity-yak 😂). It is not far from Cape Town city itself, so one can spontaneously take a leisurely drive to explore the region, like we did. One could also join one of the many tours on offer, or hire a personal tour guide. Prices for both options vary, depending on what you want to experience. Whatever option you choose, you will not manage to see everything this amazing region has to offer, let alone visit all the vineyards. You need time. Lots and lots of time. It is a very enormous and geographically interesting area, stretching a little over 22300 square kilometres and largely mountainous, some reaching 2000 metres. There are several ranges (many with fascinating sandstone peaks), cliffs, canyons, caves, waterfalls, rivers, natural pools, springs, forests and other wonderful attributes of nature that simply cannot all be seen in one little holiday, possibly not in a lifetime. The Mediterranean climate, where summers are hot and dry and winters cool, wet and windy is excellent for the vines. They really thrive, though the winelands have also been affected by the crazy global climate changes in recent years. It has been snowing more than usual during winter so there are more snow-capped mountains peaks in the summer. As mentioned before, there are so many vineyards, very old and very new, so we opted to visit the ones in the second oldest (330 odd years old) European settlement town called Stellenbosch. Cape Town was the first settlement. Stellenbosch is also known as the “City of Oaks” due to all the oak trees lining the streets. These were planted by its founder and namesake, Simon van der Stel. Stellenbosch is a very beautiful town situated in a valley with mountains and hills as a backdrop. Oh, and we only managed to visit three wine producing farms this day. All that sipping and spitting can be quite loopy…uhm…merry…uhm…tiring…hic 😵

This has nothing to do with wine. It’s the only brandy distillery in Stellenbosch, and home to the award winning best brandy. The current distillery, dating back to 1905, is in a historical and well-preserved building complex on the banks of the Eerste River. The original building, still intact, apparently was built with stones collected from the river. As you enter the door, you are greeted with a very friendly welcoming smile…and a tasty little cocktail. After booking a tour of the working distillery, and while you wait for it to start, you’re encouraged to sit in their amazing lounge. What an impressive ambience! Where better to sip your cocktail than on a comfy old sofa or an ancient wing-backed leather chair. It feels like you’re back in the 1900’s! It was not easy having to get up off the couch, as one could simply sit there all day, but it was time to tour. We could gape at their historic copper potstills, deeply inhale brandy fumes in their maturation cellar and be bowled over by a very amusing and entertaining cooper. With funny anecdotes, “drum” beats and jolly banter, he took us through the entire wooden barrel making process. It was such fun!!

At the end of the tour we had a tasting of some of their international award winning spirits together with confectionary and cheeses. A must do if you’ve never tasted the stuff before, or if you’re a brandy lover or connoisseur. Cheers! 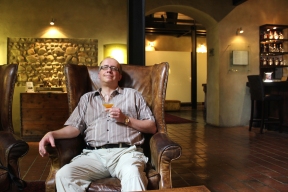 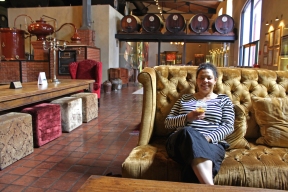 The first reaction as you enter the gate is WOW! There in front of you is a kilometre-long avenue with stone pines on either side. If you’ve ever seen one of their wine bottles, then you’ve seen this very image on their labels. Then another gasp as you exit the tree-lined avenue. Beautiful landscaped gardens and Cape Dutch buildings with a panoramic view of the winelands. The wine estate dates back to 1692 where it was called De Wolvendans, roughly translated as “The Wolves Dance” or “Dances with Wolves” (sic). About 96 years later Charles and Maria Marais bought the farm and started making their own wine. When their only daughter married Johannes Neethling forty years later, he became joint owner and changed the name of the then very prosperous estate to Neethlingshof. Maria was widowed very early, yet she still managed to run the whole business right up to when she sold it to her son and son-in-law.  She still engaged in the running of the estate right up to her death at age 68. She was one of the first female vintners in the young South Africa at the time and the Maria Noble Late Harvest is a wine inspired by this memorable and gutsy woman. The grand historic manor now houses the Neethlingshof restaurant where we had our winetasting. We could sample five different wines and nibble on delicious tit-bits. Yes, you really have to spit it all out after rolling it over your tongue or swirling it in your mouth. Sometimes a sip or two “by mistake” fell down your throat. So what, sip happens! We were not able to tour their cellar as bookings have to be made at least 24 hours in advance, and not because we had wobbly legs. Tsk-tsk…It was a lovely experience anyway the wines we had were really good. 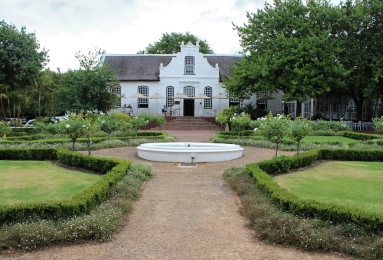 Die Bergkelder is Afrikaans for The Mountain Cellar, and the first of such in South Africa. This is a really sensational place! We were very impressed by everything we saw, sipped and swallowed. No, no spitting out of such lekker stuff! Another surprise was how “young” the Bergkelder is. Founded in 1967 means that the two of us, !oh-my-golliwog! are older… 😱 Whatever. We booked a wine tour and did not have to wait long for it to start. There’s a maturation cellar with more than 20 thousand barrels of wine. You also take a refreshing stroll on a little footpath along the banks of the Plankenburg River, cross a little bridge set in a green and plush big garden to enter the mountain cellar. After a short informative audio-visual before you are escorted to one of the many stone alcoves. There are five different wines to taste on this tour, and each wine is presented in a different alcove. Each alcove has hundreds, maybe thousands of old and dusty brown bottles stacked against their walls. The lights, soft and slightly dimmed, turns the creepy “dungeon” to a very romantic room. Then after a short walk down an amazing passage with half a million bottles flanked on each side, you enter a cellar filled with French oak casks. Wow! These beautifully carved casks are more than three hundred years old! Oh, and we were told that all the bottles lining the walls were full of wine, but undrinkable. Hmmm?? We could drink some other grape products though, like “Black Gold”, the most divine and unusual coffee and chocolate brandy! 😋 …and we didn’t have to spit it out…No, it’s not one of theirs, but it was served from their bar area. The end of the tour takes you through their bottling plant which is really big…ten thousand bottles per hour big! 🙀

Did you know that Die Bergkelder has a unique range of Fleur du Cap unfiltered wines? Yes, they launched this wine in 1998. The natural flavours and varied characters of the grapes are retained in the wine, with the least amount of human tampering. 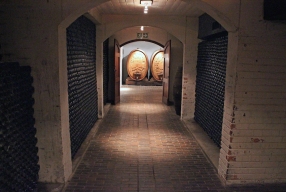 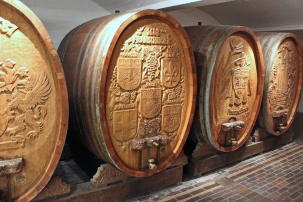 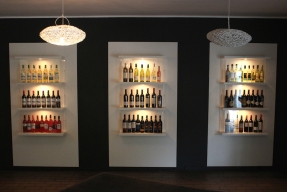