Day seven: Vineyards. Wineries. Distilleries. So much to see, so little time. We will not talk about the weather again because it changes quicker than a tossed salad. Between brushing our teeth and tying our shoe-laces, the skies went from clear to cloudy and now it was drizzly. Taking this into account, we decided to visit a few wine estates around the corner.

The heavens opened up as soon as we arrived, forcing us to scamper into the first building with an open door. Dripping wet and shivering, we asked if we could taste some wines. No problem, so we were escorted to their lovely and cosy tasting room. Diemersdal is more than three centuries old, has a view of the Table Mountain and lies in one of the Cape’s oldest wine regions. There were many wines to be had, but we only ordered eleven. Oops! One of their staff was German so it was nice to sip and chat. We also found out that the owner of our favourite wine shop in Germany would be visiting them the next day, so we arranged for her to include the wines that we liked in her purchase. We loved the “8 Rows Sauvignon Blanc” best and the “Pinotage Reserve 2012” was also lekker! The sun shone by the time we were finished, so we walked around and admired the Cape Dutch buildings and gardens for a bit before driving to the next farm.

A very interesting story is that while cultivating new land not so long ago, prehistoric stone tools were discovered, proving that hominids lived here more than 700 thousand years ago. The first wine produced on the farm was only in 1699. Another interesting and funny little detail about the farm is that in the 1900’s their wines were prescribed by a doctor…for sick children! It was a strong dessert-style mixture, and only to be taken by the teaspoonful. Phew! The farm was also previously called Bloemkoolfontein (Cauliflower Fountain). A mouthful, even for me, so glad that they changed the name to Fairview ✍. We sat in an amazing tasting room a glass wall on one side, where one could see their maturation warehouse and cellar. Barrels and barrels of delicious wine in the making! We chose eight different wines to taste and these were served with their very own produced goat cheeses. What a culinary delight! Like they say in German, Gaumenschmaus 😋 This made us hungry for more, so after finishing with nibbling and sipping, we had lunch at the adjacent Goatshed Restaurant. It was…Wow! Not only do they produce their own wine and cheese, but also beer. All foods are fresh and home-made. They also have goats E-I-E-I-O 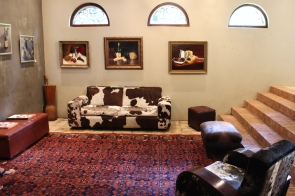 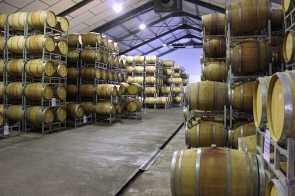 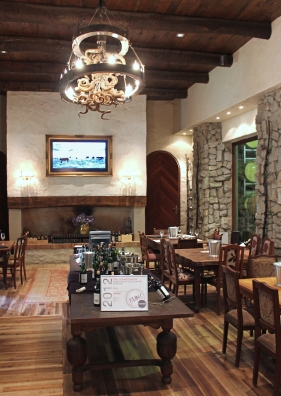 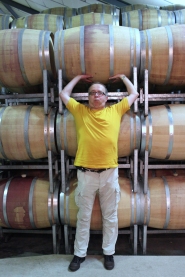 The Goat Tower at Fairview Wine and Cheese, Paarl

The owners, Cyril and Beryl were visiting France when they fell in love with goats’ milk cheese. They were inspired to start the first goats’ milk cheese production in South Africa. They bought Saanen goats (Swiss origin) which are known for yielding a lot of milk. These arrived on the farm in 1980. With help and assistance from an Italian who settled in South Africa after WW2, the cheesery slowly developed into what it is today. Saanen goats do not do well in hot temperatures, so all the sheds have sprinklers on the roof to cool them off. These cute and entertaining ones in the photos below are only a few of the thousand or so kept on the farm. We admired them for ages, especially being stumped by the male sitting in the middle. His horns were bigger than the “door” but he managed to get them through anyway, and just in time to stop the lady coming down from the top. “You cannot pass me” he seemed to say. Men!! A few minutes later the other lady came down. As they say, there’s power in numbers girls, so they rushed past Big Billy and joyfully hopped as soon as they reached the grass below. Nyeh-Nyeh! It was really funny 😂 E-I-E-I-O, with a baa baa here and a baa baa there, here a baa, there a baa, everywhere a baa baa…we headed off for home 😆 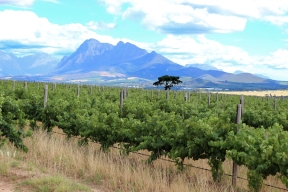 On the way home, just a block or two from the house, we saw hundreds of Egyptian Geese at the lake. They migrate there every year and according to residents, are quite a pest. They are tolerated though… 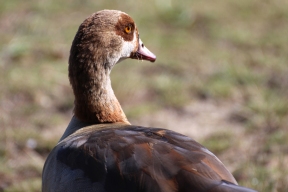 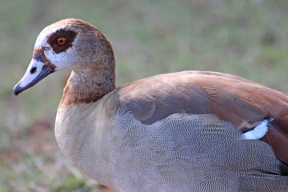