Day Ten: Aaah! this is the life *happy dance* Our front teeth are still intact, the weather is good, health even better (so much delicious food and…uhm…fermented thirst quenchers) and best of all, the exchange rate is very, very good. You’re probably wondering about the teeth mention. Well, nowhere else in South Africa will you find so many people sporting a front tooth gap like here in the western Cape region. The Passion Gap, also known as the Cape Flats Smile. This is a debatable phenomenon because it’s not clear why the four top front teeth, whether healthy or not, are deliberately removed. There are arguments about it being fashionable, traditional, or for health reasons, or because the fishermen did it, or peer pressure, or just because it is so, but the one reason that seems to stick is: that it’s mainly for sexual reasons. I’ll just leave it right here. These gaps are mostly adorned with gold or pearly white artificial teeth, or left as is. As I have a front tooth covered in gold (it’s just a third of my tooth), many presume that I too have a Passion Gap. Hahahaha! Nooo, the gold bling-bling thing was just me being a rebel at the age of 21 (official coming of age at the time) and also just because I could 👍 All my dental work was also completely sponsored, which made my decision to shine easy. Regrets? Never!

Oh, as this is also our last day in the beautiful city of Cape Town, our chauffeur for the day,  brother dearest, is taking us to one of the “must see” areas in the region. So yabba dabba doo, off we go, to the good old Cape of Good Hope.

The drive down to Cape Point from where we were staying is very scenic and interesting. After a bit more than 95 minutes, we reached our destination. The attraction here (other than a restaurant and curio shop) is to reach the top of the “new” Cape Point Lighthouse. The old lighthouse was built too high up the cliff which caused problems for the sea farers as it the light could not be seen from the sea below, especially when it was foggy. The new one is a bit lower, and has the brightest light of all the country’s lighthouses. You have to leave your car at a parking lot as it’s not possible to drive up to the top. Only too right! Too much beautiful flora and fauna will be damaged by exhaust fumes and engine noises. You have two options to get up there: take a deep breath and climb those steps as you can see in the photo on the right (it only takes about fifteen minutes…apparently…but some short person did not believe it) OR you can opt for the Princess and the Pea route 👸🏻 (fairytale yes…but still) and use the Flying Dutchman, a funicular, like we did. See, Mister armed-to-the-teeth 📷📷 is still fresh and now ready to start clicking. We used the steps on the way down, which was much better as we could extensively explore the interesting areas we’d seen from the top. 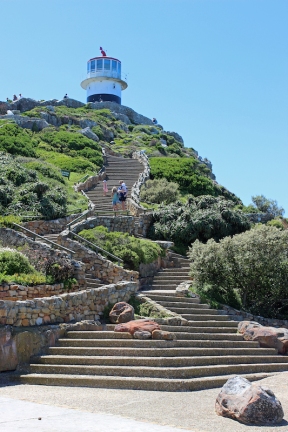 The next few photos depict the Cape of Good Hope (with Diaz beach – left photo) with such an amazing rocky coastline, which also seems to fascinate the little black lizard. Contrary to popular belief, the Cape of Good Hope is NOT where the two oceans, Indian and Atlantic, meet, nor is it the southernmost tip of Africa. It is however the most south-western point of the African continent. Diaz beach is “only” twenty minutes of wooden steps away from the top of the cliff but worth it. Here you will mostly be alone to enjoy thundering waves or the soft beach, or maybe not. A few hungry baboons might also suddenly show up. They’ve been eyeing you on your way down, so will be expecting a picnic party. Seriously, they can be very aggressive and will stop at nothing to get hold of your bags! It is safer not to carry anything and better anyway because climbing back up is strenuous and almost three times longer than going down. 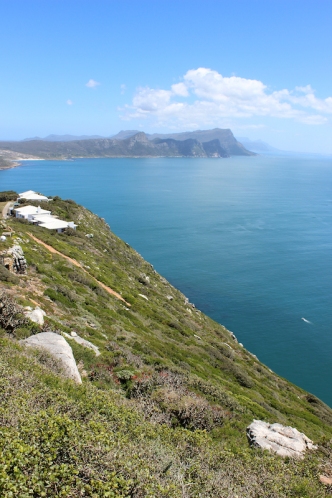 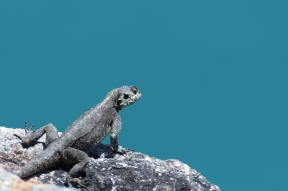 As the whole area is a Nature Reserve, you will find many beautiful and unique flowers and plants. There are also lots of snakes, or why would there be such an ominous warning?! We fortunately did not see any. Blrrrr!

We expected to see baboons but definitely not any ostriches! There were so many roaming on the rocky beach (not the Diaz) and the three of us were alone here, so it sometimes felt a bit scary. An ostrich would suddenly run towards you then stop in mid-trot. After a while animals and humans felt comfortable enough with each other, so much so that they (the animals) started prancing and flaunting in front of the camera! The fun ended for us when three bus-loads full of noisy tourists stopped by. We left immediately. 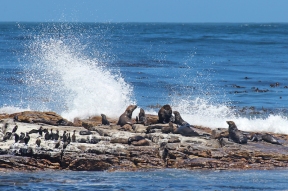 On the drive back we followed the False Bay coastal route and, near Castle Rock, were so lucky to see fishermen returning from the sea with their catch of the day. The lively exchange between the “givers” and “takers” seemed to be over in no time. Fresh fish needs to be transported in time. We walked between the anchored boats and cooler vans, taking in the smells (not recommended) and wishing we had a cooler bag or something so as to buy a fish or two. 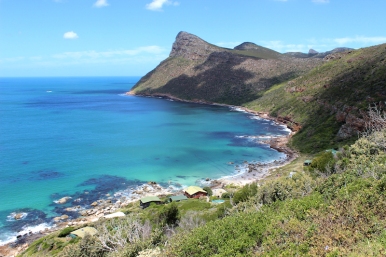 We passed through beautiful and/or attractive towns like Simonstown, Fish Hoek and Kalk Bay then stopped over in Muizenberg. You know you’re in Muizenberg when you see the colourful wooden beach huts on the beach. They are one of the most photographed objects and found in many travel and/or other brochures and advertisements. Muizenberg also has a vast beach which is very popular because it is shallow and most importantly, WARM. One can stroll on the beach, scream on the water slides, take surfing lessons, do the catwalk (a 3km coastal walk) or explore the town and make merry. Why not take the train which runs all along the coast between Simonstown and Muizenberg. The railway line is almost on the water and it’s amazing. Try it! 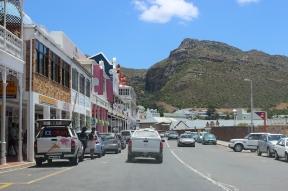 Last but not least, the tourists! Heehee…