Day twelve, with a dozen impressions. Last night was our first sleep “alone” in this very big country. We survived, hee-hee! Our room for the night, with a full view of the ocean, was a very large honeymoon suite, with beds for four people (???), a couch, dining area and TWO bathrooms, both en-suite. Just the definition of their en-suite was a bit puzzling. The one at the end part of the room had an open air shower (no roof) with big leafy plants. It looked more like a tickle zone. The other one…hmm. A bathtub on a raised bed full of white pebble stones and big enough to swim a lap or two, a basin and a toilet all squatting right there in the middle of the room. No walls. No privacy. Orgy? Cough-cough. Oops! So one of us decided to go get tickled and meet some crawling thingies, and the other turned on the taps and foamed bubbles almost to the ceiling. We slept well. The morning sounds of splashing waves, chirpy (and thirsty) birds and sizzling bacon started the day off well. 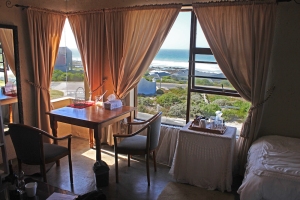 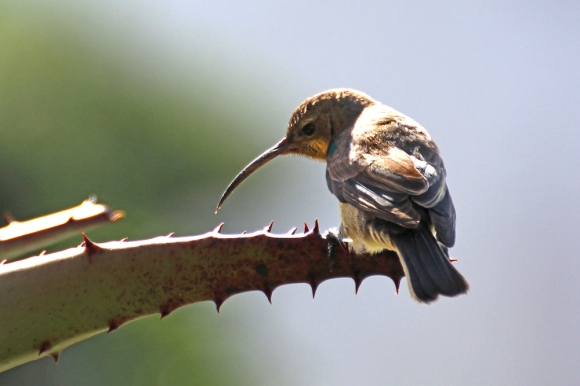 This is the geographical tip of Africa and also the point where the two oceans, the warm Indian and the cold Atlantic, meet. The different ocean currents, winter storms, high roaring waves and strong winds have caused many a ship to perish in this area, estimated at 150 so far. We did what most tourists do when here, we posed! Hee-hee. As you can see, it was quite windy, but we walked all the way, and back, from the southernmost tip of Africa to the Cape Agulhas Lighthouse. The whole area has a boardwalk so it’s easier than tramping on stones or clambering over rocks. Shh, we did that…we clambered… 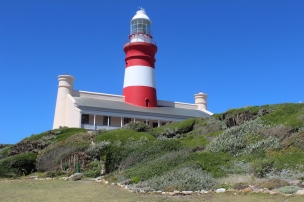 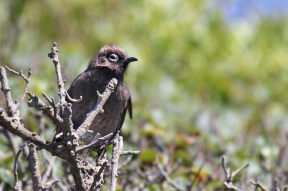 This incredible regional road was both a bit scary and exciting. Scary because it was very empty. We did not see any human being for miles on end, just naughty monkeys with hanging toolilys. The roads stretches on and on…and on…yawn, seemingly never-ending, but we stopped a lot to admire the wonderful nature and of course, the birds. It was not easy just getting out of the car as we were so scared of stepping on snakes, but thankfully none of them wanted to meet with us. After about a hundred or so kilometres, the road ends, in the middle of nowhere, and joins the N2, also in the middle of nowhere 😜 We took the national road because we were undecided as to where we would like to stay overnight, so wanted to find a place before it got dark. 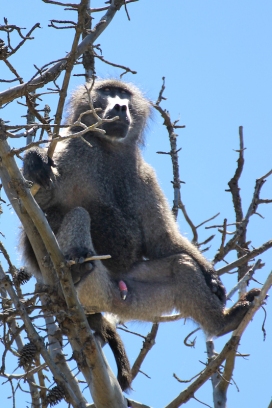 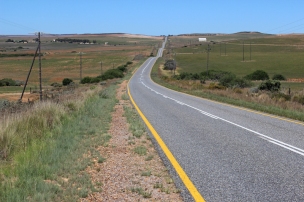 We reached the small coastal town of Mossel Bay, the half-way stop along the Garden Route between Cape Town and Port Elizabeth. After an almost three hundred kilometre drive we were tired, hungry and happy. Before we could enjoy the beach sand between our toes, we had to search for a lodgings first. A few calls later we found a B&B on the hilltop overlooking the town and with a lovely view of the sea. Room good, parking nasty. Imagine sinking down from the street above and having to curve into a narrow parking space with thick pillars everywhere. It’s easy, said the old man (owner). Yeah right, then you park the car. He did. The next day he offered to “unpark” it for us, probably because the burning clutch whiffs and smoke was making his dogs bark in terror.

Mossel Bay is also known for the renowned oil-from-gas project which started in the apartheid era when the threat of oil sanctions (or higher prices) against South Africa were looming. There are quite a few natural gas stores off the coast of this harbour town. It was interesting to see the town where my father spent a lot of his time and knowledge as part of this project in their early days. We did not linger here longer than necessary as there were other exciting stuff waiting on the road ahead. Stuff we were not so sure of 😊 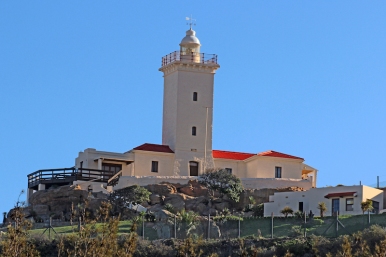