We spent a few days of the festive season 2012/3 in Neckarsteinach, a lovely little town in the very south of Hesse, a province in Germany. While we were there we also arranged and hosted a party for family and friends. It was a lot of work, phew! 😰

Plop! In the pan you go…Two or more kilos of minced meat, with lots of fiery spices, were cooked the night before… 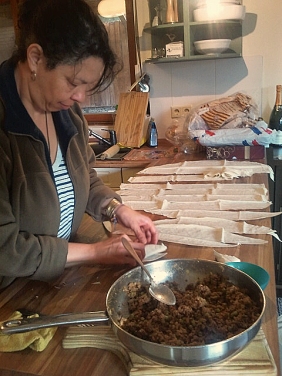 …and with another kilo or so of minced meat…Meat balls! Impressive drinks bar too  😋

This is the final spread. Many hands did NOT spoil the broth. Oh, and the scrumptious finger-licking quiches were all made by the tall handsome one. Finger. Licking. Good.

Finished! and the kitchen did not burn down either   😂   A good team, ain’t we? At the end of the evening we were pleasantly…hic…surprised by some very slurp-sip-slurp-hmmmm appetizing Sgroppino cocktails, which were shaken and stirred by the yummy one wearing glasses. Cheers, honey!

Even though December was unusually mild (warm and no snow) it never stopped raining in the catchment areas. The result was a lot of flooding, as seen here on the river Neckar. By the time these pictures were taken, a lot of the water had subsided a bit already, but the river was still overflowing. Fascinating yet intimidating…shiver.

The sluice gates and the river power plant on the left, and a scary overflowing river on the right. The acrophobic one actually managed to cross the river on that very ‘scream-yelp-it-looks-dangerous’ bridge. Sniff!

A lovely view of Neckarsteinach. The rolling hills and fields in the foreground, the river Neckar thereafter, the town after that, the famous castles behind, and more rolling hills to round off a picture perfect town.

A pair of Egyptian Geese (Alopochen aegyptiacus). There were many of them, and each one looked different to the other. The only distinction is that males are larger than females, and quieter. Wonder why! They only ‘quack-quack’ when aroused, so they say. The ladies however, are more vocal, and uhm, all the time. What else?   😌 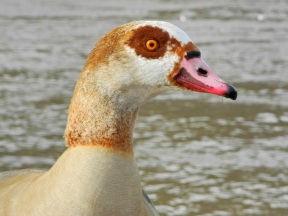 These saw Mr. Camera, and what do you know, posed, preened and dare it be said, er…uhm “Smiled!” I’m so beautiful…do you like my quacky smile…tra…la…laaaaaaa!

Neckarsteinach is famous for it’s four castles. The oldest is thought to have been built around 1142, and is privately owned, so sadly no spontaneous public viewing of the inside is possible, unless pre-arranged and approved. The next oldest castle, built around 1200, is also privately owned, and the same ‘no-you-cannot-have-a-quick-look’ rules apply here too. Whatever, still great to see, after a steep and…gasp…breathless climb. The other two are ruins, so go ahead, feel free to explore! Once a year, in July, and at the onset of darkness, the castles are also lit up, followed by a fantastic display of fireworks.

This is the entrance to one of the private castles. Peek-a-boooooo!

Some of the flora clinging to the ancient walls. Now and again something with eyes…eeek! would peep through the crags, then immediately slither away. Snakes? Lizards? Bllrrrr! 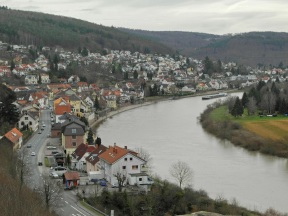 Meander, meander. The Neckar river entering and passing Neckarsteinach (left) then off it snakes between wooded hills towards Heidelberg and beyond (right), until it finally enters the Rhine river, in the city of Mannheim. An interesting little tit-bit is that the river, at this point, is the border between two provinces, Hesse and Baden-Württemberg, which ends at the last curve on the picture on the right. In other words, each province has half a river… 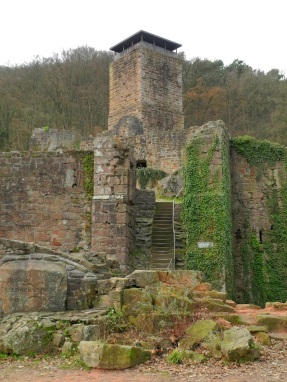 The ruins of one of the castles. A wonderful view of the valley below can be seen from here. Those that are adventurous, and young and supple, can climb higher for a better view. Acrophobic’s might want to steer clear from the edges though…just saying

As mentioned before, one can climb higher (see those steps? ughh!) for an exceptionally fantastic view, like the one on the right. Of course, the one holding the camera is incredible too! Such a shot is just out of this world!

Hi, howdy, tell me some more. A statue of the Listening Man, carved in wood. Yep, wood. Nope, uh-uh, there will be NO comments from this little peanut gallery. Wink-wink…

This wonderful view of a half-timbered house in the town centre was taken from the promenade directly on the Neckar river. An amazing and pretty picture, not so??? Very high and not-sure-how-old protecting walls, the beautiful house, a giant mistletoe hanging from above (yes, we kissed and kissed and kissed and…you know, kissed), and one left-over lighted Christmas star decoration hanging just behind that. The big round stone right in front just makes it oh so aahhh, and the mountain in the background finishes this off perfectly. Aaaaahh! Oh, okaaaay, go on. Print and frame it! 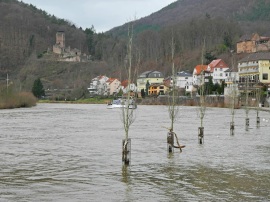 The town, the castle ruins, the rolling hills, the over-flowing river eeep! and young sturdy trees standing to attention. And there, right in the middle, a barge, chug-chugging its way towards the sluice gates. 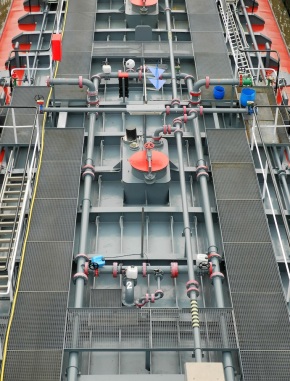 All river traffic was prohibited for days due to the too high water levels. This was not so good for business, as a lot of the transport on the river are carriers, like this one. It was also very interesting to observe the ‘lifting’ process at the sluice gate.

The whole process did not take long, then it was ready to go on it’s way. A queue started building up in no time at all. The El Capitanos were quite anxious to catch up on lost time. 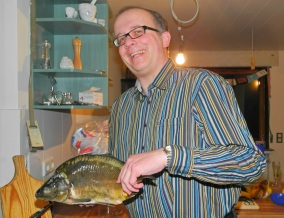 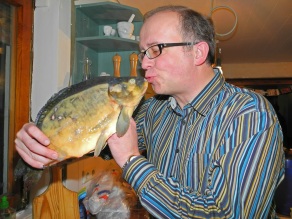 After giving it a very good wash, so as to get rid of any slitherings, slimes, scales and any other leftovers from breakfast (pre-capture), you grab it by the posterior, turn it around and eeewwww! pucker-smack-smooch, declare it good enough for human consumption. The assistant abandoned ship.  🙀

There you go honey, take a nice hot bath…uhm…boil. The carp starts to get a blue-ish tint, and not because it is freezing hee…heeee… 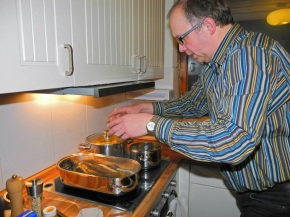 Ahem. Aha. Ähm. Stare. It is still in there. Hmmm. Is something maybe missing? Okay, let me try this. Ohhmmmm! Hocus-Pocus! Boiling hot, boiling hot, what else shall go into the pot! Simsalabim, the salt is now in! 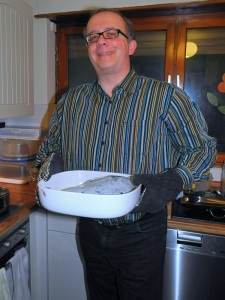 Ta-daaaaa! It worked! Our personal traditional meal for New Year’s Eve. The multitudes can now be fed. Happy New Year and Joy to the world!  🎉  He actually made two of these. Yes, TWO. Proud, satisfied and a medal deserving gourmet chef. Well done honey!

Phew! Glug-Glug-Glug. What a…glug-glug…thirsty job that was! Glug-glug-glug. It’s so hot in here! Giggle. Happy face. Red face. Oh okay, and ‘blushing’ ears too. And with all the oohs, aahs and yum-yums, there also was satisfaction all round. Clap-clap-clap. Bring on the fireworks and let the New Year roll in! (before there’s a ‘plop’ and some-one falls over hee heeee)