So now we are already six days into our holiday, and there are three things that made us happy when we woke up this morning. One: some-one has a birthday today *singing*. Two: we’re not so bothered by the weather anymore. Three: Ireland is totally magical. Make that four and five too. We spent a relaxing afternoon at our lovely accommodation yesterday, so today we headed off to the Ceide Fields which are in the county of Mayo, about an hours drive away. Well, as we’re always making ooh-ing and aah-ing stops on the way, it took a bit longer…but only just a bit…

The Ceide Fields is an almost six thousand year old Neolithic landscape which contains the oldest known field systems in the world. This ancient Pine tree trunk (with roots) is about 4300 years old! 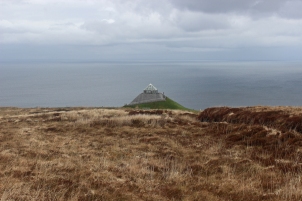 This is what the fields look like, with the cone-shaped building where the Pine tree is housed, plus a little museum with an audio-visual show explaining the history. Please make the effort to watch the video, or take one of the free guided tours, before you walk in the fields, because only then will you be able to understand it all. Otherwise it might just look like a pile of stones to you, nothing else.

The other attraction at the fields is a platform built on a cliff across the road, where you can see, weather permitting, the very famous Downpatrick Head in the far distance (right)…our next destination… 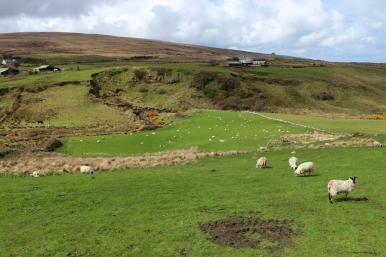 Beginning to love these animals! Did you know that sheep are not native to Ireland, but had to be shipped in? They’re not even native to Europe, Africa or the Americas, but originate from the Middle East (Mesopotamia). Go figure. Did you know that the kiwi fruit is also a Chinese gooseberry? Or that already ten thousand years B.C. elephants were getting tipsy from the fermented fruit of the Marula tree in Southern Africa? That very same fruit used to make the yummy-hic-hic Amarula liqueur of today? Hmmm…A bit of useless information…Got carried away there 😉 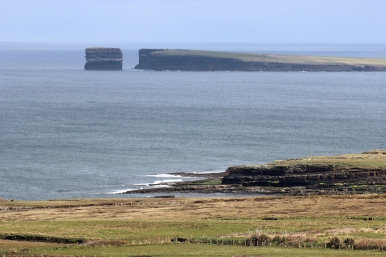 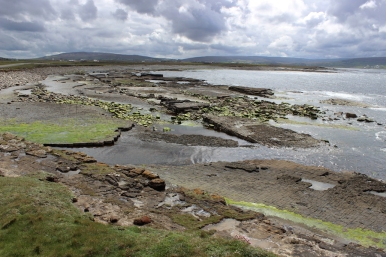 The rugged coast on the way to Downpatrick Head. The name is derived from when St. Patrick himself founded a church on this cliff outcrop. The ruins of the church building, a stone cross and a holy well can still be found here today. It is extremely dangerous to walk near the cliff edges, especially when it is windy. The ground is very plush, soft and wet, so beware! We tried to heed this warning, but such beautiful photos can only be taken from the edge. So, again, rattle rattle (the bones), beeeeeeeep (the stopping heart) and shake, rumble and groan (the breakfast leftovers), toe by toe, we cautiously neared some of the edges. Other parts were way to soft, even though some dare-devils (not us) stood on them just to take a few selfies. This impressive sea-stack, called Dun Briste (broken fort), is about fifty metres high and about eighty metres from the edge of the cliff. There are many legends about why this piece was cut off from the mainland, ogres, pagans, ship ropes, but a favourite is that St. Patrick gathered all the snakes together, struck the ground with his rod, and whoop-whoop, the parting of the rocks. So all the snakes in Ireland were left slithering on the sea-stack. A very welcome myth for those of us with a snake-phobia 😀

Poll na Seantoine. A very large, interesting and natural thirty metre blow-hole. The fencing around it is made of stainless-steel flutes. So every time the wind blows, you hear lovely whistling music. After the 1798 uprising, several men, hiding from the redcoats, saught refuge down there, but drowned when the tide came in. The memorial, on top, was erected to honour them. 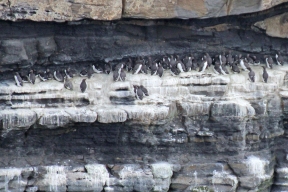 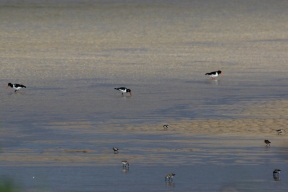 These look like Guillemots nesting on the one of the ledges of the Dun Briste (left) and Oystercatchers (right). We did not see many types of birds, only lots and lots of sea-gulls, which was quite a bit disappointing. Would have loved to see the puffin. 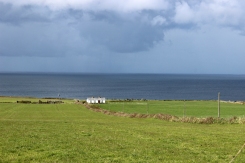 On the way back to Enniscrone, we passed by this lovely strand called Lacken. The coastline is quite craggy, but breathtakingly beautiful with a massive beach. You are also to see three counties from here, Mayo, Donegal and Sligo. It was a short hiatus, as rain clouds were starting to gather, so we headed back to our hotel. After refreshing ourselves, we went downstairs for dinner. Trying to secretely arrange a birthday surprise for my one and only without him getting suspicious was a bit difficult, but I managed, and this on the day of our arrival 🙂 The service staff brought his dessert out, with a cute little lit candle, and a chocolate written Happy Birthday message. They also sang! The other guests joined in too. The cherry on top was when the song was over, a group of four men at a nearby table cleared their throats and sang in Gaelic!!! It was absolutely beautiful! All the guests gave a roaring applause to them and especially to the blushing birthday boy